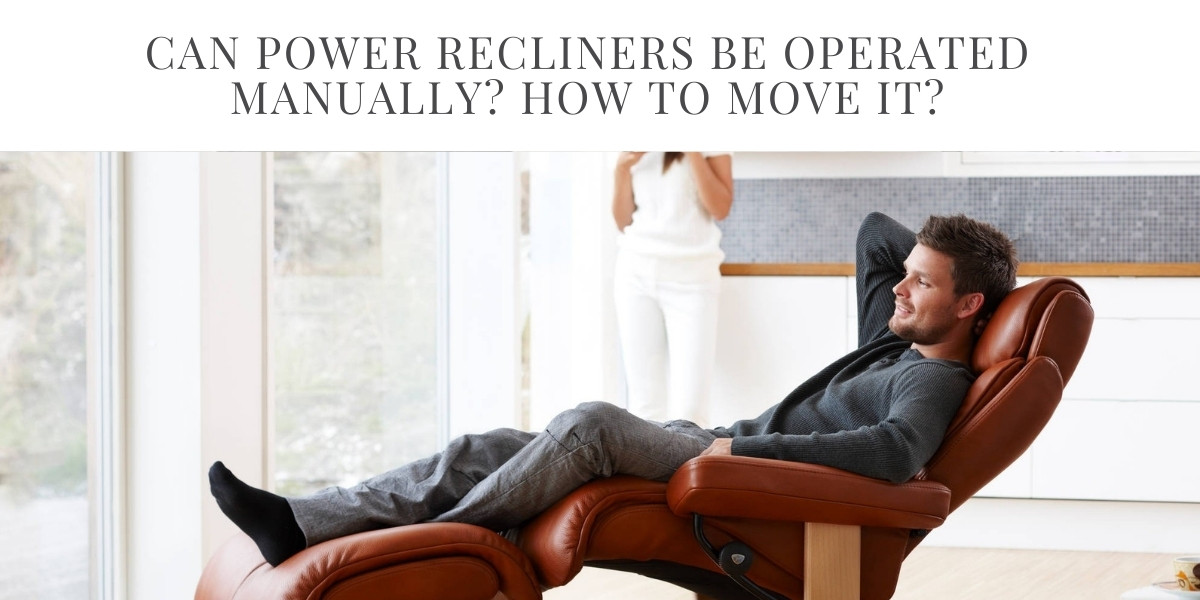 Can Power Recliners be Operated Manually? How to Move it?

Power recliners are an excellent addition to your home. They provide splendid body support, multiple reclining positions, and exceptional comfort, just at the push of a button. In short, it is an experience you will never want to miss.

However, power recliners are fragile and heavy, and moving them around your house or to a new place is a different challenge altogether. You will have to employ various tactics to move them without damaging the chair or its functionalities.

This article will provide some tips and tricks about managing power recliners. Since power recliners offer superior comfort and convenience than manual recliners, it would be futile if you don’t consider purchasing one.

So without further ado, let’s learn more about power recliners.

What are power recliners?

Power recliners are similar to conventional ones in design but have electrical components and offer more functionality. These components allow the recliner to move into several reclining positions as per your requirements.

Check this post: 5 Best Lane Recliners In 2022 To Purchase.

How is a power recliner different from a manual recliner?

Apart from running on electricity, power recliners offer more features than manual recliners. However, detailed information will ensure that you make the right decision before purchasing. So to help out, we have listed five differences that will help you make a better choice.

However, you get more features than its manual cousin, making it a worthy consideration if you are looking for a recliner that offers comfort and convenience.

Can power recliners be operated manually?

As we mentioned earlier, power recliners are heavier than manual recliners, so moving them is not an easy task. Since power recliners carry additional components, moving around the house or to a different location can be stressful. You also have the risk of damage to your recliner or its electrical components, which might ruin some recliner functions.

So how to manually move a power recliner between places?

Although moving a power recliner may sound like a tough ask, it is not entirely impossible. You can follow these steps to move your power recliner within your house or to a different location without damaging your recliner.

The other thing you need to consider is the design of your recliner. While some may have locking tabs, others will feature clips, and it would be best to read the instruction manuals before your start disassembling.

Here are the steps to disassemble a power recliner:

Step 1: Use a measuring tape to find the frame’s center. Since most brands use the exact dimensions to build their structure, its center should be 50 inches from either end.

Step 2: The next step involves finding the screws on the frame. You can find them on each side where your backrest meets.

Step 3: Turning counterclockwise should remove the screws, and now you can lift one end of the frame. Repeat the process for the other side, but remember to apply some pressure on the floorboard before proceeding.

Step 4: Remove the screws that join the backrest and armrest. After you remove the screws, detach bracket joining and turn the bolts located under the armrest counterclockwise.

Step 5: Now gently slide one recliner end and pull it up out of the backrest using your foot. Repeat this process for the other end until you remove both ends without damaging the recliner or its functionality.

Step 6: After removing the screws, you can detach your recliner’s arms by straightening and pulling them carefully. Remember not to apply too much force, or it may damage some vital electrical components.

Step 7: Now, remove the screws from your recliner’s feet and pull them out of the frame.

By now, your power recliner should be ready for transport. However, as power recliners are heavy, you would still require more than one set of hands to complete the job. Tools like a flat-blade screwdriver and measuring tape also play a vital role, and so it would be best if you keep them within your reach.

Pro tip: Take pictures during the disassembling process, as it will help you remember the steps during reinstallation.

Also, check this out: 5 Best Barcalounger Recliner in 2022 for Your Home.

Here are the things that you need to prepare before moving your power recliner:

You will also require a zipper bag or container to keep all the loosened screws, bolts, and nuts. Additionally, don’t forget to keep your camera or mobile phone set to click some pictures.

It can take a toll on its carriers, and you would never want that to happen. However, this scenario can only occur with recliners requiring a power source.

Wrapping up your power recliner is the next step that you should follow after doing all the preparation. Whether you have disassembled your recliner or moved the entire thing, wrapping will protect it from damage and other issues.

You can employ plastic wrap to secure your power recliner before moving it. Additionally, wrapping your chair or its components make them easier to carry as you will have a better grip on the recliner’s surface.

Please note: You will require this step only if you move your power recliner to a different location.

4. Loading – Loading is the final step of the moving process, which will require precision and proper care. Since power recliners are heavy, you risk dropping them or their components while loading them in the car. A drop can cause damage to the electrical components or the recliner, which might impair its functionality.

It would be best to employ a larger vehicle and a lot of workforce to load your power recliner on your car. Also, ensure that you have enough space and support on either side of the recliner to reduce the risk of sliding during transport.

One of the best ways to ensure smooth delivery of your power recliner is to reach out to a moving company. Although it may cost you some extra cash, it is a safer and better option.

How to reinstall a power recliner?

We assume you are at your new location and would love to reinstall your power recliner. However, reinstalling a power recliner requires more effort than disassembling it. It requires more attention, and that’s where our pro tip of taking pictures while dismantling comes to the party.

Having those pictures will undoubtedly make things convenient, and all you have to do is recall every step using them.

Moving power recliners can be a stressful task, and you may have forgotten about taking pictures. To help you out, we have prepared a list that will help you with the reinstallation process.

If all goes well, your reinstallation process is complete, and you can relax in your beloved power recliner. However, if you find a problem, it would be best to reach out to a professional to solve the issue.

How to manually recline an electric recliner?

Electric or power recliners have inbuilt electrical components, such as the motor, to allow them to recline into different positions. You have moving parts throughout the frame of an electrical recliner, which requires power from either a power source or lithium-ion batteries.

The entire function of an electrical recliner depends on the inbuilt motor, and you have the convenience of choosing between various reclining positions with buttons. Unlike manual recliners, which require your body weight to select your reclining angles, electric recliners don’t rely on weight.

Additionally, power recliners come with interconnected electrical components that work in tandem to offer you the best reclining position as per your requirements. You can even try independent backrest and footrest angles while searching for the most comfortable reclining angle.

It is a characteristic that makes a power recliner different from manual variants, and all you need is a power outlet or battery pack to get a comfortable sitting experience.

However, some models allow you to reposition the recline angles using manual force, especially during a mechanical or power failure.

How long can you operate your power recliner using a battery pack?

Since battery packs offer you more versatility and convenience, they are growing in popularity among recliner users. In general, most homes love to have their recliners placed in an open space.

However, you may not have power points available in your planned area, meaning you will have to reposition your recliner according to your outlet’s position. With battery packs onboard, you now have the freedom to place your recliner anywhere you want.

For instance, a 2200mAh battery will provide enough juice to power your recliner for about 10 days under moderate usage. The period may change depending on your use or the capacity of your battery.

Here are some of the benefits of using a battery pack for your power recliner:

Read more: Best Power Recliners with Heat and Massage in 2022 for comfortable rest.

No, power recliners don’t have a manual override function. Since power recliners come with a motor that does all the moving, you will have no authority over your recliner if it is not connected to a power source.

However, you can choose a battery-operated power recliner to use without a power source, but it will still be the motor that operates your recliner’s functions.

How to clean a power recliner?

One of the best and safest ways to clean a power recliner is with a vacuum cleaner. However, you can also use soap, detergent, white vinegar, and water to remove stains from your recliner.

Here are the steps to clean your power recliner:

If you have tougher stains on your power recliner, you can also use a solution of baking powder and vinegar to clean it.

Can I damage a power recliner while operating manually?

Although power recliners are heavy, they are also fragile, and applying too much force may damage its electrical components. They come with an electrical motor that takes care of all functions, and operating a power recliner with too much pressure can damage its functionality.

It would be best to use a power recliner as per the directions provided by the company to prolong its usage.

Why is my power recliner not working after I operated it manually?

A power recliner may face some issues after you operate it manually. While most of them may be technical, some may occur due to other reasons.

Here are the possible reasons behind this problem:

If you cannot solve these issues yourself, it would be best to reach out to a professional for help.

© Copyright 2022 All Rights Reserved by ReclinerAdvice

You can find out more about which cookies we are using or switch them off in settings.

This website uses cookies so that we can provide you with the best user experience possible. Cookie information is stored in your browser and performs functions such as recognising you when you return to our website and helping our team to understand which sections of the website you find most interesting and useful.

Strictly Necessary Cookie should be enabled at all times so that we can save your preferences for cookie settings.

If you disable this cookie, we will not be able to save your preferences. This means that every time you visit this website you will need to enable or disable cookies again.